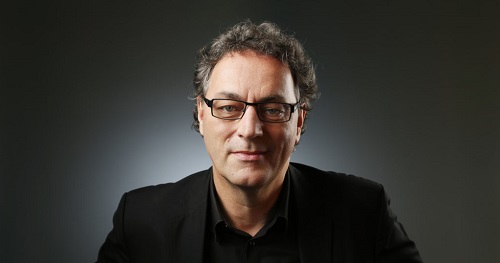 Over the past two decades, Gerd Leonhard has risen to one of the top 10 futurist keynote speakers worldwide. With over 2,000 engagements in 60+ countries since 2004, and a combined audience of over 2.5 million people, Gerd has been listed by Wired magazine as one of the Top 100 Most-Influential People in Europe, and as ‘one of the leading media futurists in the World’ by The Wall Street Journal.

Gerd focuses on the future of humanity and technology, digital ethics, artificial intelligence, future-leadership and foresights. His keynotes, are renowned for their hard-hitting and provocative  style – inspiring, humorous, motivational, and always personal. Using cutting-edge creative  motion design, Gerd’s performances have become a unique immersive experience on the big screen, reinventing the visual side of the conference industry.

A true thought leader in the futurist space, Gerd is above all a dedicated humanist who believes that  all technological progress should further collective human flourishing. His credo is simple: People, Planet, Purpose and Prosperity.

Gerd uses his keynotes, presentations, workshops and advisory sessions to deep-dive on complex topics. Recurring themes include the coming redefinition of human-machine relationships, exploring what it means to be human in a world of machines and algorithms, the future of work and jobs, and the ethics of technology. As Gerd Leonhard likes to say, humanity will change more in the next 20 years than in the previous 300 years – so let’s maintain and protect what makes us human!

Gerd Leonhard has spent his lifetime  engaging  with change, as a professional artist, internet entrepreneur, and author; now exploring the role of visionary thinker and speaker. Gerd’s background is in the music business; in 1985 he won Berklee College ‘Quincy Jones Award’ and subsequently spent 12 years working as a professional guitarist, composer and producer. He then caught the internet-bug and became a digital music & media entrepreneur.

From 1995 to 2002 he served as Founder/CEO of several internet startups, based in San Francisco.  In 2002, following the .com meltdown and the 9/11 crisis, Gerd returned to Europe and discovered his new calling as a futurist and as the CEO of The Futures Agency, a global network of over 40 leading futurists, speakers and personalities. The future is already here – we just haven’t paid enough attention!

As we rush headlong into a machine-led world where the very essence of human being is being increasingly challenged, Gerd is reminding us to consider what moral values are we prepared to stand up for before “being human” alters its meaning forever.

Gerd travels around the globe to speak at leading conferences, events and seminars, helping individuals, enterprises and government organizations to deal with ‘future shock’, and to embrace change. Gerd is also an influential author. He is the co-author of the visionary book ‘The Future of Music’ and the author of five other books including his last best-seller, ‘Technology vs. Humanity’, which is now available in ten languages.

Gerd’s films on the future of technology and humanity, digital transformation and artificial intelligence have reached millions of viewers. He is a fellow of the Royal Society of Arts (RSA, London) and an advisory board member of the Indian and Canadian Research Institutes. He resides in Zürich, Switzerland and presents both in English and German.

WORD OF MOUTH FROM AROUND THE WORLD

“Working with Gerd was an excellent experience, and he definitely pushed our executives’ thinking forward. Not only did he outline major technological and societal trends affecting our business, he did so in a way that was engaging and personal.” Adam Carroll, Inter Public Group

“Gerd Leonhard distinguishes from other futurists trough his emphaisis on the human factor in the story between man and machine. While some focus on predicting what technology will bring soon, he actively searches a positive story for humanity and he clearly sets limits on technology.” Kristoff Vandermeersch, HR Expo

“Gerd allows the audience to travel to and from the future. The result remains long after the conference, when you rewind his presentations after a few years, and see it happening in front of your eyes. I had the pleasure to hire when I was at Pestana Hotel Group, and this specific event reached the highest score ever in 4 decades. Gerd is a pleasure to work with, and I highly recommend his services.” Nuno Ferreira Pires, SPORT.TV