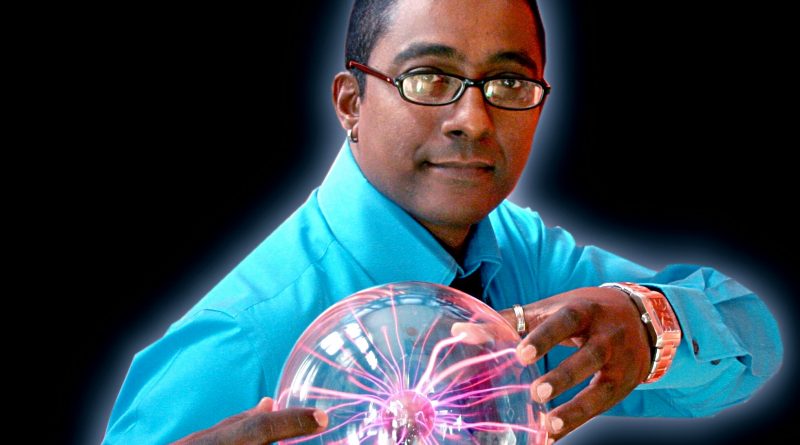 Professor Megandhren Govender (aka Dr G) has over two decades of experience in teaching undergraduate and graduate students at University. Over the years he has seen thousands of students graduate from his classes to take up strategic positions as engineers across the world.

Through his Physics Support Classes, he has seen learners from all walks of life succeed in accomplishing their dreams ranging from artists, medical doctors, entrepreneurs, astrophysicists, to mention just a few. He has been a coach and mentor to many youngsters, educators, parents and graduates. Dr G has supervised several postgraduate students in research areas covering Chiropractic, Homoeopathy, Mathematics and Astrophysics.

Science Shows bring Science and Mathematics back to Life

Dr G’s unique science road shows have put something really special back into the teaching and learning of Science, mathematics and technology. With his shows “Riddles in my Soup Mug”, “The Flying Circus of Science”, “That Sense-able Show” and “Who moved my Frisbee”, Dr G has brought a brand new perspective into the teaching Universe. With brilliant demonstrations, witty humour, cool dance moves and tons of motivation, these shows have been watched by tens of thousands of learners across South Africa.

Dr G has been working closely with educators through schools, DOE, UKZN and DUT. His unique approach to teaching has been used in many classrooms around South Africa. The hands-on approach to teaching has reinvigorated and inspired both educators and learners. ‘Show and Tell’ has been taken to a whole new level with learners demonstrating more interesting phenomena in the classroom. Teachers are also finding innovative teaching methods with the use of multimedia, YouTube videos, etc.

Taking Science to the Masses

From live demonstrations at uShaka Marine World, social gatherings (including birthday parties, Women’s Day events, Community Fairs) through to the use of social media such as YouTube and Facebook, Dr G is reaching thousands of people on a daily basis. The internet has enabled him to connect with people abroad from far afield as Oman, USA, UK, Australia, Far East and India. Dr G’s efforts at spreading the FUN of SCIENCE has been internationalised and is now entering a Golden Age of teaching, learning and sharing of knowledge.

Dr G has worked with several large corporates to change the way people think not just in terms of science and mathematics but life in general. Community development and outreach are at the core of our mission to changing people’s mind sets especially when it comes to motivation, vision and inspiration. Community engagement through corporate sponsors brings together people of all ages and backgrounds. Such a spectrum of knowledge and experience is most likely to pay dividends within the community. We are also involved in staff development irrespective of the industry. We have worked with a range of companies ranging from the chemical industry, manufacturing industry, research and development as well as academic institutions.

Our approach to teaching, motivating and inspiring people is such that our focus is to engineer a new generation of original thinkers. A single original thought can and has changed the course of civilisation many times over.

WHO IS Professor Megandhren Govender (a.k.a Dr G)?

Prof. Govender was awarded the Bronze Medal for the Advancement of Science and the Henry Dyer award for his Masters dissertation. He completed his PhD in relativistic astrophysics in 1999 in which he focussed on the role of shear, anisotropy and heat dissipation on the end-states of gravitational collapse. With over sixty research papers in top-tiered research journals, Prof. Govender’s research interests are wide and varied and include exact solutions of the Einstein-Maxwell equations, braneworld stars, black holes, strange stars, quasars, pulsars, neutron stars, inhomogeneous cosmologies and extended irreversible thermodynamics. Over the years he has supervised many masters and doctoral students in relativistic astrophysics, homoeopathy and chiropractic. He has a strong collaborative network of researchers from across the globe including India, United Kingdom, Spain, Brazil, Oman and Japan.

Prof. Govender started off his lecturing career at the former Technikon Natal campus as a lecturer in Physics. He quickly moved up the ranks to associate professor and Head of Physics before joining the School of Mathematics, UKZN in 2003. He mathematics and applied mathematics to undergraduate engineers at UKZN, becoming a favourite amongst students. His unique teaching skills and insights earned him the name “Dr G” and is well-known for the famous line: “This Problem is now Solved!” His easy-going attitude and insightful approach to mathematical modelling of physical phenomena attracted many postgraduate students with diverse backgrounds including a chemist. Prof. Govender has been a reviewer for many prestigious research journals including Physical Review D, General Relativity and Gravitation, International Journal of Modern Physics D and European Physical Journal C.

Prof. Govender has taken physics to the masses in a unique and exciting way. His shows “Riddles in you soup mug,” “the Flying Circus of Science” and the “Science of Fun” have been watched by tens of thousands of learners and educators across KZN. He has also taken the theatre world by storm with his shows “So You Thought Einstein was a Genius” and “So You Thought Einstein was a Genius Too!” which at the Natal Playhouse and IZulu Theatre in Durban. Dr G has enthralled and mesmerized audiences with his spell-binding and riveting live performance that combines Physics, Mathematics, Technology, Engineering, dance and humour. He has attracted various media recognitions while popularising science which include appearances on  ECR, Eastern Mosaic and most recently, SABC’s MELA.

Prof. Govender is actively involved in changing the way teachers teach and learners learn, particularly at schools. He has done work for the Department of education via various intervention programmes. He has been invited to several teacher workshops and teaching and learning conferences to show case his unique approach to teaching various subjects. The use of demonstrations and the connection between theory and application in everyday life makes his approach to teaching and fascinating. Dr G is well respected amongst educators in various disciplines.

He is a much sought-after motivational speaker and life coach having worked with large corporates such as FNB, the Ceramic Industry, Toyota, eThekwini, Sofanis, to name just a few. Prof. Govender has been inspiring a whole new generation of learners, graduates and postgraduate students through his unique presentations and insightful lessons. His approach to teaching is second to none and has earned him huge respect amongst teachers, students and academics.

Professor Megandhren Govender is married to Dr Neetu Govender, a chiropractor in private practice. They have two children, Kyla and Lev who share their quirky and interesting views on reality and life in general. Megandhren loves music, fashion and dance. His work and life has been greatly influenced by Michael Jackson, Anthony Robbins, REM and Madonna. His current interests include the search for extra-terrestrials and life beyond the death.

Will the Real Einstein please stand up?

How does a kid from a shanty town living in a tin and wrought iron house with no running water or electricity grow up to become a leading astrophysicist with over 60 international research papers on Einstein’s gravity, black holes and collapsing stars? He is one of South Africa’s most recognized astrophysicists having changed the mindset and attitudes of tens of thousands of school learners, educators and the general public through his spring-loaded shows and effervescent personality.

How does one define GENIUS? Most people will equate Einstein with genius. Does having the ability to solve complex mathematical problems or excelling academically earn one the status of genius? What about our talented artists, musicians, poets, craftsman, teachers and entrepreneurs? We walk among amazing people with unbounded talent, vision and perception. The ability to think outside the box and to discard commonsense drives creativity and progress. Having the ability to say “YES” even if you are thinking “NO” is a major advantage in taking a leap of faith. We all have at the very least one special talent, be it carving a spoon out of a fallen tree branch or coming up with the next best thing after Facebook yet many never realise it. CHANGE THE WAY YOU THINK AND YOU WILL CHANGE THE WORLD!

Can you walk through an A5 page? Most people will say no. I will show you how this is possible. How many nails can you balance on the head of a single six-inch nail without using glue, magnets or holding them together? The pessimists amongst us will say none. The blinkered thinkers will say one. I say any number. I will open your mind to infinite possibilities through the power of speech, brilliantly constructed demonstrations and experiments. By changing the way you observe the physical universe, whetting your curiosity and by appealing to your latent youth we will unleash the GENIUS within YOU!

From dunking marshmallows into liquid nitrogen (temperature of -1960C), launching methanol rockets, levitating objects, baking bread using ice-cream through to creating fire vortices using a dustbin and a turntable, the audience will be elevated to another level of thinking. The experience through audience participation, visuals, motion, humour, music and dance will leave everyone wanting more. This is a life-changing, mind-blowing and jaw-dropping experience.